Rationalization is a process of not perceiving reality, but of attempting to make reality fit one’s emotions. – Ayn Rand

We are backwards rationalization creatures. We use something known as Cognitive Dissonance in many areas of our lives. This is a concept that states that you will experience mental discomfort when you hold two different and conflicting ideas simultaneously, or when new information contradicts what you currently know. It is argued by some philosophers and psychologists that every action we take has a direct or indirect link to our survival. For cognitive dissonance, this theory helps ensure a person’s mental survival. Another name for this concept would be self-preservation. We not only use this concept to rationalize with our actions, but also with our words ( or spoken thoughts).

I have already touched briefly on identity, which is our values, personality traits, possessions, etc. Our identity is what we categorize ourselves with. When we are asked who we are, we will list objective and knowable traits to be measured by. These will include your name, religion, job, marital status, sexual orientation, where you’re from, etc. This would also be referred to as the Ego. Whenever our ego is threatened, we literally take it as an attack on our self. For example: Have you ever tried to argue with someone about their religion or politics? Even if you present factual evidence that goes against their beliefs, they will still work out in their head some way to say or show that they are still right. Arguing about religion or politics is a futile and ultimately a pointless battle to pick.

When arguing in the above scenario, the person who is steadfast in their beliefs would be avoiding cognitive dissonance.

Festinger’s (1957) Cognitive dissonance theory refers to a situation involving conflicting attitudes, beliefs, or behaviors within ourselves. This dissonance, or inconsistency, produces a feeling of discomfort leading to an alteration in one’s attitudes, beliefs, or behaviors to reduce the discomfort and restore balance, or mental well-being. We have an inner drive to hold all our attitudes and beliefs in harmony and avoid disharmony (or dissonance).

Aesop gives a great example in his fable about a fox and some grapes:

One day a fox comes across a vine with delicious looking grapes above him. He decides that he wants them, so he tries to climb the tree. He then fails. Soon after, he asks an owl to get the grapes for him. The owl refuses. Finally, after many different attempts, the fox concludes that he really doesn’t want the grapes because they are probably sour. This mental rationalization relives the discomfort from being unable to acquire the grapes he desired earlier.

If your friend recently got into in a car accident, you might come up with different reasons to explain your sudden fear of driving. You might say, “I heard the roads are slippery and not safe to drive on right now.” Explaining these unwanted emotions with some sort of rationalization helps remove the true root cause of the undesirable emotion.

If you make a big purchase such as a house or a car, you will start to come up with many reasons as to why it was a good decision to do so. “My old car was gonna be unusable soon, and I deserve it from all of the hard work I have put in lately.” A real world example is supposedly used by the automotive manufacturer, BMW. It is said that BMW commercials are not for those interested in buying a BMW, but solidifying the purchase decision as a good one. Advertising for luxury car brands differs widely, but check out this advertisement.

A teenager that once opposed drug use who then decides to smoke would come up with reasons as to why it was now okay. “I only did it once. They are legalizing it anyways, and I didn’t pay for it.” Ben Franklin would use this technique on his opponents. He would ask an enemy to do a favor for him, such as borrowing a book, and they would backwards-rationalize that they did it because they liked him.

People will more often than not seek out information that reaffirms what they already believe. Typically, people filter out and ignore material that contradicts what they believe or are searching for. For example, liberal atheist may only watch MSNBC and read books about why God does not exist, to strengthen their worldview and identity about those beliefs. As a contrast, scientists or even someone who is reaching self-actualization will try to look and delve into contradictory material to get an overall view on subject matter and try to come up with a valid conclusion.

How Do You Reduce Cognitive Dissonance

One of the best ways to live a life of peak performance is to look at your life through an objective and rational lens. We can reduce this mental “Mind Trick” by being aware of it when it may happen. Write down your beliefs and attitudes that you may have a biases toward. Now, try to consider alternative possibilities or arguments against your beliefs. If you are visual, write it down and graph it out. What do you believe, and why do you believe it? Above all – don’t lie to yourself.

“The man who lies to himself and listens to his own lie comes to a point that he cannot distinguish the truth within him, or around him, and so loses all respect for himself and for others. And having no respect he ceases to love.”

Hopefully this article paints an accurate picture of what cognitive dissonance is and how it looks. With increased understanding we can look more deeply into the opposing beliefs and conflicting behaviors in our lives. Understanding this concept will help you notice where you are staying stagnant, and how to take small steps for positive change in your life.

Check Out the book “A Theory of Cognitive Dissonance” by Leon Festinger to see more ways we lie to ourselves and how to change them.

Trust Is Everything In A Relationship – A Scientific Approach 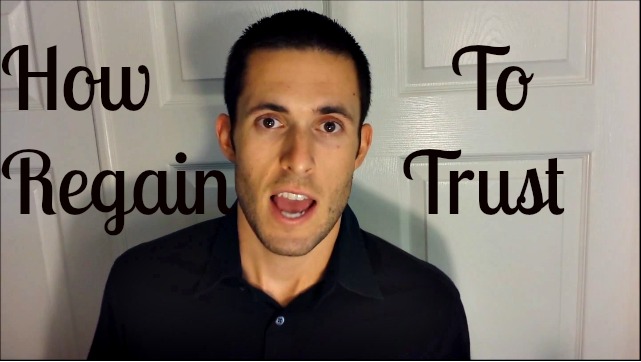 Trust Is Everything In A Relationship – A Scientific Approach